What to do in Rhodes, home of the Colossus? Our Top 10!

Rhodes is not only the home of the Colossus, it is also a Greek island of the Dodecanese with 1000 colors and activities! It is part of the Dodecanese archipelago, off the Turkish coast. Tourists are attracted by its Mediterranean climate, its sandy beaches, its archaeological sites and its historical heritage. The island is also known for its medieval heritage, including the old town of Rhodes Town, a UNESCO World Heritage Site.

When to go to Rhodes?

We recommend that you travel to Rhodes between mid-May and the end of June or between the beginning of September and mid-October. The climate is very pleasant, the hotels offer more affordable prices and, above all, there are far fewer people!

How to get there?

From the airports of Paris and Marseille, you can enjoy a direct flight. Aegean Airlines offers flights to the Cyclades island, including one or two stopovers from France. EasyJet operates this route directly from Paris Orly.

How to get around?

Several buses serve the island. There are two bus stations in the Greek city. KTEL serves the eastern part of the island.

Where to sleep in Rhodes?

For a successful trip to the Dodecanese island, we suggest you find your hotel on this map :

A charming hotel in the new city, ideally located, the Sperveri Boutique Hotel is an enchanting interlude in the heart of Little Jerusalem (the city’s nickname). 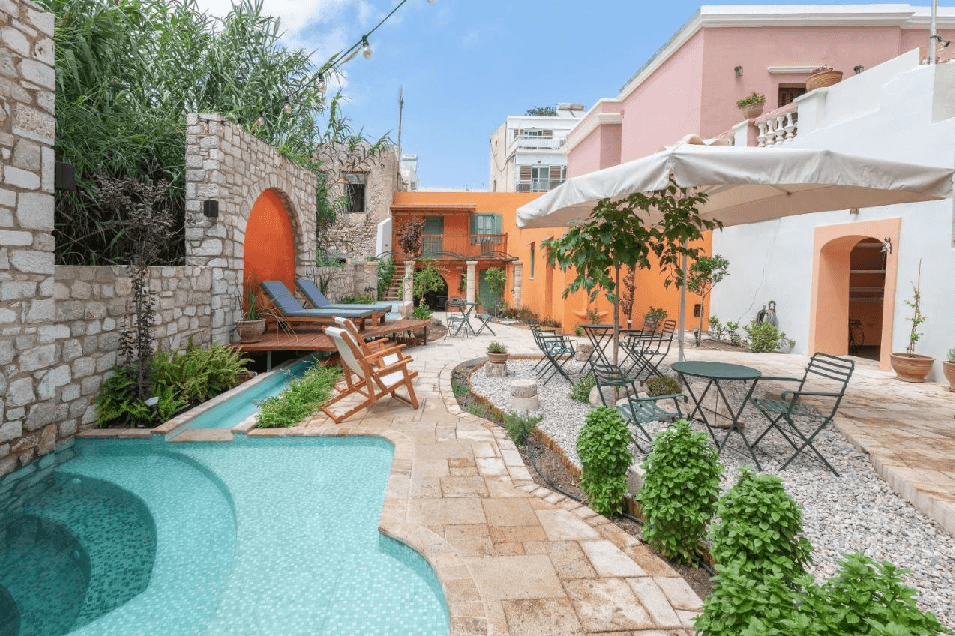 For even more luxury, you can stay at the Boutique 5 Hotel & Spa – Adults Only! It features a beach, private pools, a modern spa and rooms with panoramic sea views. 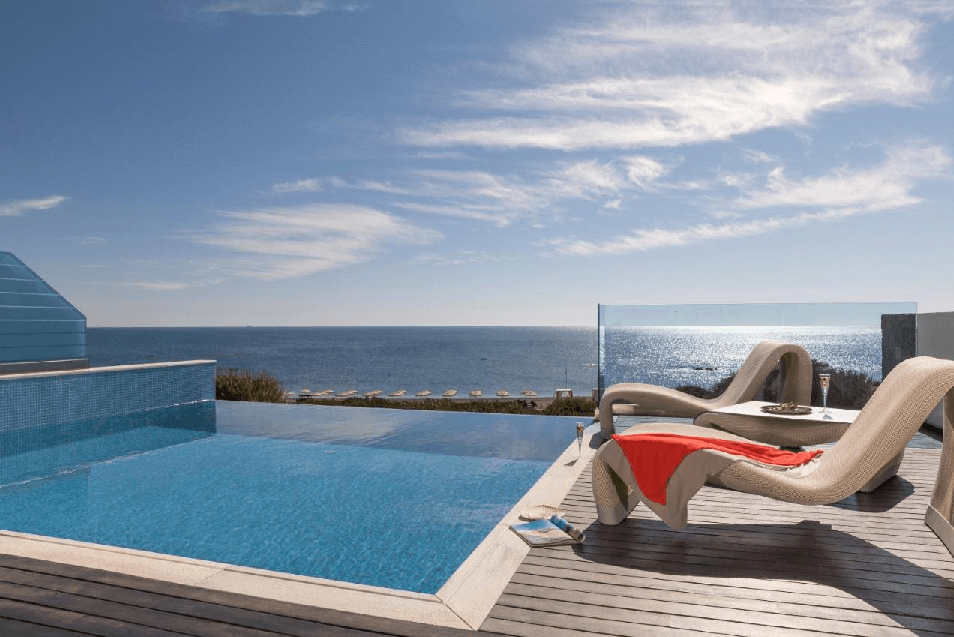 What is the budget for a holiday in Rhodes?

For a 7-day holiday, with no set period, for 2 people and departing from Paris, here is an overview of the budget that could be yours during a trip there:

What’s the currency in Rhodes?

As Rhodes is part of Greece, and Greece is part of the European Union, its currency is the Euro.

Is life expensive in Greece?

The cost of living in Greece is 27% lower than in France. However, the local purchasing power is 33% lower. When travelling, keep in mind a local budget of at least €59/day per person.

The 10 best things to do in Rhodes

The island has many beaches with fine sand and crystal clear waters. All of them are very well maintained and offer many water sports activities. If you want to relax in the sun, go to one of the beaches of Lindos, such as :

If you prefer a more lively atmosphere, head to one of the beaches in Rhodes Town, such as:

RENT A BOAT IN RHODES ⛵

During your stay on the island, you will have the opportunity to rent a boat in the Dodecanese and explore its beautiful islands, including:

You can also easily book a day cruise below!

A city steeped in history, Little Jerusalem is a medieval city classified as a UNESCO World Heritage Site. It is even the largest and best preserved fortified city in Europe.

Cobbled streets, harbour and historical buildings, taverns, shops… Lose yourself in the city and take in the sights. Don’t miss the:

Lindos is a must-see village on the island. It is located 50 km south of Rhodes Town, about an hour away.

Set in a breathtaking bay, Lindos is a beautiful, typical Greek village with white houses built in amphitheatres, overlooking the sea and overlooked by the Acropolis.

The best way to get from Rhodes to Lindos without a car is by bus, which takes 1 hour 43 metres and costs €4 – €7. The bus to Lindos takes about 1.5 hours including transfer time and leaves every hour.

Alternatively, you can drive to Lindos and park in one of the town’s car parks on the higher ground, and then walk to the end of the day.

You can also book activities in Lindos below:

You have probably already heard of the famous Colossus of Rhodes. This huge statue that was supposedly built at the entrance to the port, representing freedom. Did it exist? Does it still exist? To find out more, go to the Port of Mandraki, as well as below:

The Colossus of Rhodes history

6. A cruise to Symi Island

A true Dodecanese paradise, Symi Island is less than an hour by boat from Rhodes. Book this organised excursion below and discover one of the most beautiful beaches of Greece in the Bay of St George, as well as the very colourful island of Symi for a day:

Outside of Rhodes Town, here are 6 destinations we really want you to go:

The city of Rhodes is a very popular tourist destination, especially for young tourists. The city offers a wide variety of bars and clubs, as well as many nightlife activities. Bars and clubs are usually open until late at night, and there is something for everyone. If you like live music, there are several bars that offer live music every night. If you prefer to dance, there are also several clubs that offer DJ nights every night. In addition, there are many nightlife activities organised in the city, such as cabaret shows, magic shows, concerts, etc.

You can also go to Faliraki, a local seaside resort. Falikari is located just 10 km south-east of the capital and offers idyllic beaches. And after dark, the atmosphere is great, with international restaurants, pubs and discos all vying for attention.

It is the perfect island for day trips. It offers all sorts of different walking and trekking routes, including mountains, forests, areas of historical interest, places of natural beauty, wine regions, coastal walks, etc. The island offers a wide variety of routes and paths. You will find great loops to do from the capital, but also from:

From a simple walk to a day hike, there are routes to suit all tastes and fitness levels. Here are a few must-do hikes in Rhodes:

The diversity of trails, paths and places to discover on the island means that you will never have to travel long distances to get to the start of your hiking route.

Rhodes has many shops and markets where you can go shopping. The most famous is the central market, which is open every day from 8am to 2pm. Here you will find many fresh products, such as fruit and vegetables, but also souvenirs and handicrafts. Other shops and markets in Rhodes Town are open daily from 9am to 9pm. You will find souvenir shops, clothes shops, jewellery shops, flea markets and department stores. The main shopping streets of the capital are :

You’ll find there many many shops!

Ippokratous Street is a pedestrian street in the city centre. It is lined with many shops and boutiques. You will find souvenirs, jewellery, clothes and sports goods.

Sokratous Street is a shopping street in the historic part of the city. It is lined with many shops and boutiques. You will find souvenirs, jewellery, clothes and sports goods.

Armariou Street is a shopping street in the public gardens area of the capital. It is lined with many shops and boutiques. You will find souvenirs, jewellery, clothes and sports goods.

Voulgari Street is a shopping street in the hotel district. It is lined with many shops and boutiques. You can find souvenirs, jewellery, clothes and sports goods.

Rhodes (Ancient Greek: Ῥόδος / Rhodos, Modern Greek: Ρόδος / Ródos) is a Greek island, the largest of the Dodecanese. The Dodecanese is located in southeastern Greece, northeastern Crete and the southwestern coast of Turkey. The archipelago of 164 islands and islets is bathed by the Aegean Sea.

The Greek island is bordered to the northwest by the Aegean Sea and to the southeast by the Mediterranean Sea and lies between the island of Karpathos (Greece) and the Turkish coast, 17.7 km from the latter.

Rhodes weather: what’s the weather like all year long?

To find out more about when to go, we offer a summary of the island’s weather from January to December, as well as the sea temperature.