What is the Colossus of Rhodes?

An integral part of the cultural and historical heritage of Greece, the Colossus of Rhodes is a statuary monument that traces the history of the island of Rhodes. Everything about this statue, from its origins to its construction, is imbued with a warm history that can be summed up in one word: freedom. 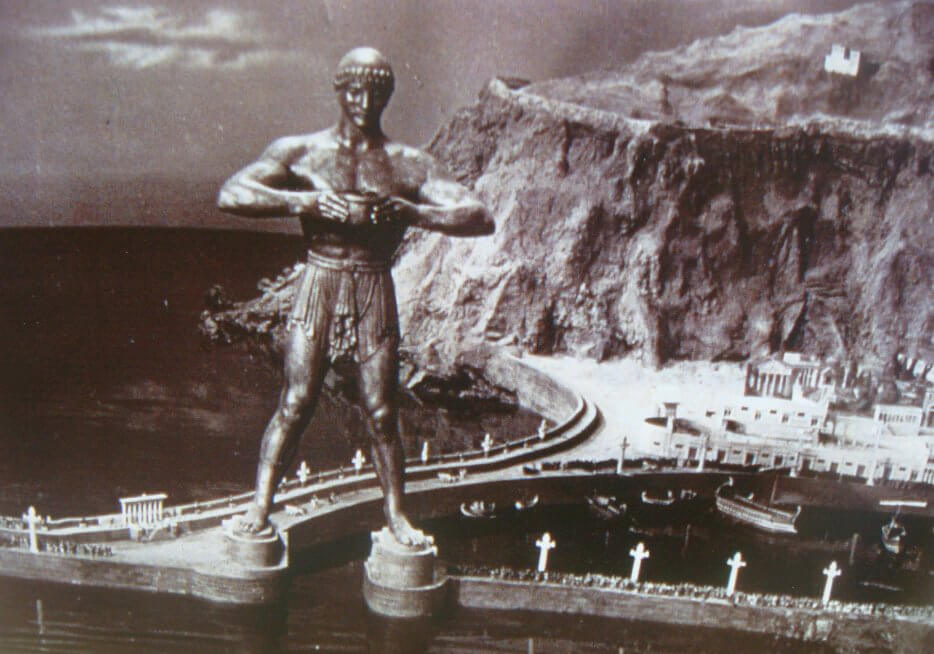 Representation of the Colossus of Rhodes in the film of Sergio Leone released in 1961.

It is certainly this vibrant epic that inspired Auguste Bartholdi, the sculptor of the Statue of Liberty, which bears a striking resemblance to the Colossus of Rhodes. To understand the architectural choices of this statue, we must go to the source of its history.

The island of Rhodes

The history of the Colossus of Rhodes is intimately linked to that of the island of Rhodes. Indeed, this island, the largest of the Dodecanese archipelago, occupied a strategic position and an important place in the local economy. She was, therefore, an easy target.

Aware of this weakness, the inhabitants of Rhodes built a rampart over a distance of 15 km reinforced by an enormous ditch. This very effective protection forced any attacker to go around the city to find a passage. In less than 30 years, the island suffered 3 very violent attacks. 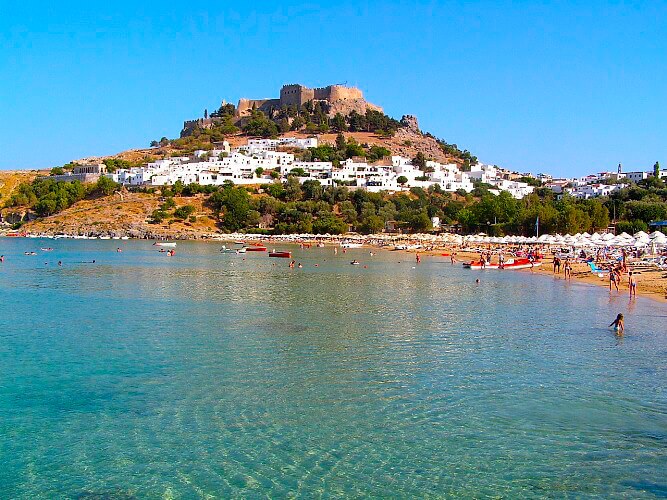 The beautiful island of Rhodes and the town of Lindos.

The last one was led by Demetrios Poliorcete who besieged the city with 40,000 soldiers in 304 BC. This impressive army was defeated victoriously like the two others before it. It was to celebrate this new victory that the inhabitants of the city decided to erect a statue called the Colossus of Rhodes in the port of their island.

What is the statue made of?

It is to its impressive architecture that the Colossus of Rhodes owes its classification among the seven wonders of the world. For 60 years it was a symbol of Greek history and the most famous monument on the island of Rhodes. Its construction was initiated by Chares of Lindos, a Greek sculptor of the second classicism.

Construction began in 304 and was not completed until 292 BC. If it took 12 years to build this statue, it is because it was 32 m high and was built entirely in bronze.

To finance the equipment necessary for the construction of the Colossus of Rhodes, the inhabitants of the island proceeded to the sale of the military equipment which had been abandoned by the troops of Demetrios at the end of the combat. It took up to 13 tons of bronze to make the statue.

This material, bronze, was chosen for its strength and durability as it is an alloy of iron and copper. Since the Statue would be exposed to the sea air and its salinity, it was important that it be strong enough to withstand the elements.

It is the face of Alexander the Great that was chosen to represent the face of the Colossus of Rhodes.

What does the Colossus of Rhodes represent?

The fame of the Colossus of Rhodes is due in part to the fact that it is the largest statue on the island of Rhodes and, above all, the only statue built in bronze and known at the time.

Better yet, his representation has helped build his reputation. The statue represents Helios, the sun god, lightly dressed, wearing a crown that represents the rays of the sun with a torch above his head.

This image will be taken up by Auguste Bartholdi through the Statue of Liberty which represents the symbol of freedom of the peoples of the world. One is tempted to believe that the Colossus of Rhodes, which was originally a symbol of the gratitude of the inhabitants of Rhodes to the sun god Helios for his protection, also represents an expression of Freedom.

An earthquake, which occurred in 227 or 226 BC, broke the knee of the Colossus of Rhodes which managed to resist to the ground until 654 AD. It was in this year that it was completely destroyed after a siege of the island of Rhodes by the Arabs.

What are the names of the inhabitants of Rhodes?

How was the Colossus of Rhodes destroyed?

Reminder of the victorious resistance to Demetrios I Poliorcete (305 BC to 304 BC), erected on the island of Rhodes around 292 BC, this gigantic effigy of Helios, the tutelary god of the city of Rhodes, was demolished in 227 or 226 BC by an earthquake.

With broken knees, she collapsed and fell apart.

Where is the Colossus of Rhodes?

The Colossus of Rhodes was a gigantic statue located near the port of the city of Rhodes (Greece, Dodecanese island), the main city of the island of the same name.

It is located in the Mediterranean Sea, in the Aegean Sea, near the Turkish coast and is the largest of the Greek islands in this sea.

Why was the Colossus of Rhodes created?

The city of Rhodes was a democracy, so it was the people (except women and slaves, of course) who decided to build this bronze statue in 304 BC, following a victory after a one-year siege ordered by Demetrios Poliorcetes (from 305 BC to 305 BC), general of Alexander the Great.

Unfortunately the Colossus had a relatively short life, only 60 years.

His physiognomy, a standing man, and his height, made him particularly fragile. Hence the “Colossus with feet of clay”!

What are the 7 wonders of the world?

What are the 7 wonders of the modern world?