Agios Nikolaos Crete: what to do there?

TheGreek islands are among the top destinations for a Mediterranean cruise. Different itineraries go through the Cyclades and stop in Crete. Along with Chania on the north coast of the island, Agios Nikolaos is another popular Cretan stopover. This small town on the edge of the Gulf of Mirabello, on the eastern coast, about sixty kilometers from Heraklion, appeals for its festive atmosphere, but also for its picturesque character typical of Greek villages, which it has not been able to abandon. During a cruise stop in the Cretan city, beautiful discoveries await the cruisers.

Feeling the pulse of Agios Nikolaos around the bottomless mirror

Agios Nikolaos straddles a series of small hills, which are themselves articulated around a lake formed during a volcanic eruption, that of Voulismeni.

According to legend, the goddesses Athena and Diana bathed in this bottomless pool. In fact, the lake is about 64 m deep. Those who want to watch for the appearance of these Greek deities can sit down in one of the taverns and cafes that have opened around the lake. 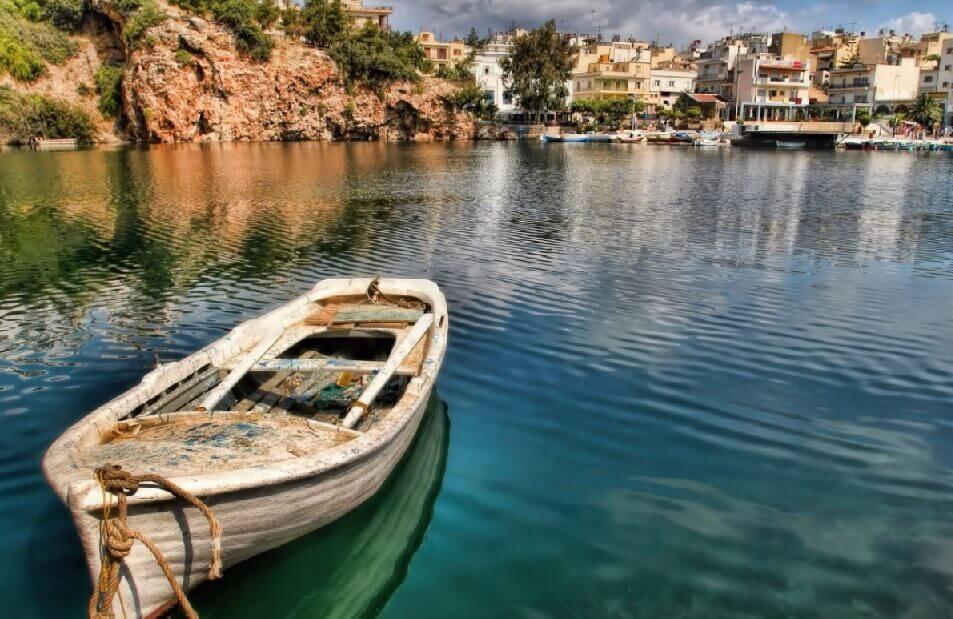 One of the typical boats of the lake Voulismeni!

This is an opportunity to taste the Cretan cuisine, considered one of the healthiest in the world. Enjoy generous Cretan mezze as an appetizer before tasting the famous dolmades, vine leaves stuffed with minced meat or vegetables. Freshly caught and grilled fish and seafood are other delights to be savored.

Stores and other businesses can be found all around Lake Voulismeni, where the heart of Agios Nikolaos beats and its nightlife pulsates. This sparkling mirror is connected to the Aegean Sea by a small channel that fishing boats use throughout the day.

At the seaside there are some golden beaches like Ammoudi, Amnos and Almyros for those who like to relax during a cruise.
cruise in Greece
. From the lake, beautiful walks along narrow streets allow to discover a more picturesque Agios Nikolaos with its beautiful traditional houses and squares. 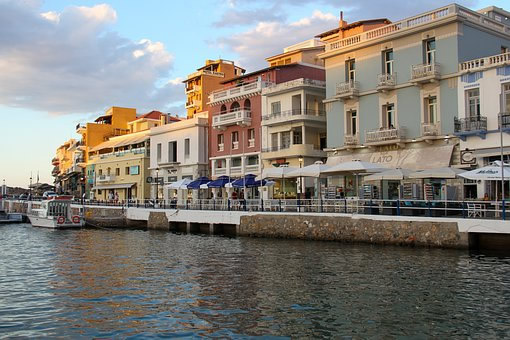 The port of Agios Nikolaos historically played a very important role during the Venetian domination.

Agios Nikolaos owes its name to a small Byzantine church built between the 7th and 9th centuries, that of St. Nicholas. The ancient religious building has withstood the ravages of time and still shows fragments of the original painting on the dome.

A part of this canvas representing plants and geometric forms is indeed covered with frescoes dating from the 14th century. To learn more about the past of Agios Nikolaos, a visit to the Folklore Museum on a busy street near Lake Voulismeni is a must.

Its exhibitions tell the story of how this peaceful fishing village became a famous tourist destination in a few years. Everyday objects and photos allow you to immerse yourself in the Agios Nikolaos of yesteryear. You can also admire embroidery and other traditional textile creations typical of the region.

Icons and manuscripts complete the museum’s collection. History lovers should not miss the archaeological museum, one of the most important on the island along with the one in Heraklion. Throughout its ten exhibition rooms, different objects inherited from the Minoan era, including sarcophagi, are displayed.

What to see around Agios Nikoalos

From the Cretan locality, you can extend your walk to a dozen kilometers, to Elounda. This pretty village is famous for its starred hotels. Some salt pans dot its coastline alongside its golden beaches.

From Elounda, a walk along the water to the peninsula of Spinalonga closing the Gulf of Mirabello is very popular. From this arid piece of land emerges a Venetian fortress entrenched behind imposing ramparts. For a long time, the Venetians faced the assault of the Turks.

In the past, an isthmus connected Spinalonga to the rest of Crete, but for security reasons it was destroyed. The fortification later abandoned its defensive role to become a leper colony. Abandoned, this monument reveals majestic vestiges dressing the landscape of Spinalonga.

During a stopover in Agios Nikolaos, it would be a pity to limit oneself to the coastline, as the hinterland offers many interesting discoveries. The most adventurous do not hesitate to conquer the Ha Gorge, located on the way to Sitia.

It is a large fault of about ten meters wide, bordered by walls that can reach 700 meters high. A few singing waterfalls tumble down the steep ramparts of the Ha Gorge to the delight of canyoning enthusiasts. Other sites allow the practice of climbing only.