Weather Spinalonga : what is the climate like all year round ?

Weather Spinalonga, here are the temperatures during the 12 months of the year

Moreover, from October to March, you will have (on average) no more than 5 days of rain in a month. Finally, note that from April to the end of August, the days have 12 hours of sunshine on the island of Spinalonga!

How to get to Spinalonga?

To get to Spinalonga, several options exist. First of all, whether you live in Elounda or not, Crete Autrement will direct you to these superb excursions departing from major Cretan cities and with a very attractive program!

If not, how can we do it? Spinalonga is located on the northern side of the island. North-northeast.

But how to get to Spinalonga?

First of all, it is likely that you will arrive by plane from Paris or another French airport in the Cretan capital, Heraklion. The city is located 75km from Spinalonga and 1h10 by car.

To go to Spinalonga, you can :

Once you arrive in Elounda, you will have to cross the narrow inlet that separates the Cretan village from the historic islet that lies just offshore. The first boats from Elounda to Spinalonga leave around 9:30-10:00 am. ATTENTION: the departure times of the boats and the opening of the sites on Spinalonga can vary during the year and according to the weather!

Spinalonga: discover the history of the leper island!

Today, Spinalonga is a curiosity for the eyes. A fortress rising in the middle of the sea, a few fathoms from a fishing village. But beyond its unusual appearance, why do we visit the island of Spinalonga? What is its history?

Located at the western entrance to the Gulf of Mirabello, the fortress of Spinalonga was built in 1579 by the Venetians, that people of seafaring explorers, on the ruins of an ancient fortress built between 3000 and 900 BC. The first goal of Spinalonga is then to protect Elounda.

In the 18th century, the Turks took possession of the islet following an assault in 1715. But it was during the first half of the 20th century that Spinalonga experienced one of its most singular destinies, becoming an open-air leprosarium. Hence its name of “fortress of lepers”. All infected Cretans were deported there, driving out the “Turkish-Cretans” who still lived there.

Abandoned on the spot, the inhabitants took possession of the place to recreate their village: school, shops, etc.

The leprosarium ended in 1957.

Today, the island of Spinalonga is a remnant of all these tragic times and events.

What to do in Spinalonga?

1. Immerse yourself in the history of the island

Whether you climb the island’s fortifications, visit the Museum of the History of Spinalonga, climb the tower at the top of Spinalonga to admire the turquoise waters or walk through the abandoned village of the island: everything on the island is history and the theater of the past.

The beach of Spinalonga is not the most extraordinary in Crete. But the waters around the islet are of great beauty.

If you find yourself in the middle of a cruise in Greece or Crete, do not hesitate to anchor and spend the night off the island.

3. Sleep in the hotel in front of Spinalonga

Book your hotel in Elounda

Elounda remains the ideal place to sleep with a view of the Mediterranean and Spinalonga. Treat yourself to this exceptional moment by booking your luxury hotel in Crete here:

Book a room at Domes of Elounda, Autograph Collection, in Elounda

In front of the island was built the village of Elounda. It remains a place full of history, for having welcomed lepers when the leprosarium was closed in 1957.

On site, equipped with your travel accessories (suitcases, handbag, etc.), you will find a 5 star hotel :
book your stay at Domes of Elounda, Autograph Collection
. A magnificent establishment, with, as you can imagine, a breathtaking view of the sea and Spinalonga! 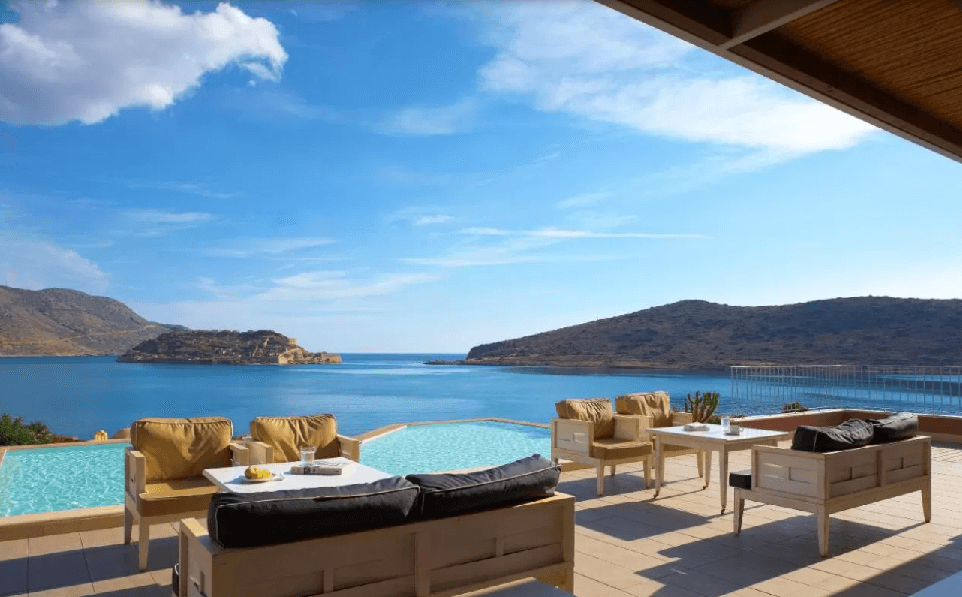 Elounda is best known as the (very beautiful) Cretan coastal village looking the mythical island of Spinalonga in the eye. 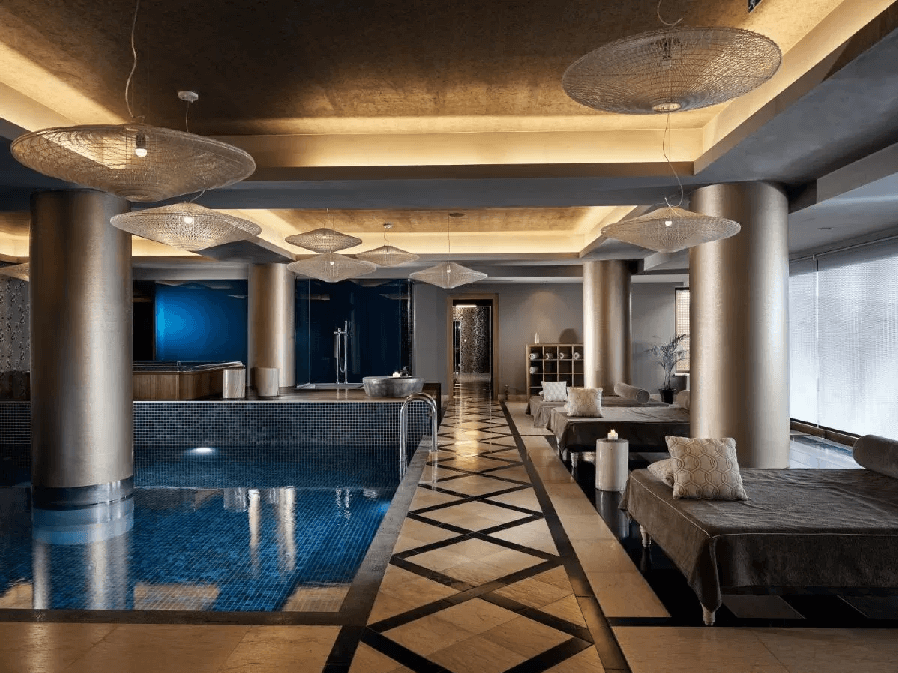 A few hundred meters from the island of Lepers, Elounda has the advantage of being a vacation spot offering primarily luxury hotels and resorts. Among the most beautiful of the island of Greece.

Book your room with pool in Elounda here
!

A luxury hotel in Crete and Elounda, from 2400€ per week.

Opinions on Spinalonga 2021: what do you think?

It is true that with the health crisis we have been experiencing since 2020, it is sometimes difficult to know what remains open and accessible to the public. Rest assured, in June 2021, just before the summer vacations, the island of Spinalonga is open to tourists and visitors.

Here is a valuable opinion to consider:

From Plaka, the trip lasts only a few minutes, followed by an hour tour of the island, with many explanations given by tables on the history of the island, Venetian fortress fallen to the Ottomans, then used in the twentieth century as a leper colony. Until 1957, the island hosted lepers who were confined there.