Passing the posh resort of Agios Nikolaos towards the eastern end of Crete, the beautiful Sitia is a small seaside town known for the kindness and beauty of its inhabitants. This small Cretan city is an ideal destination for vacationers who want to get away from the very touristy areas of the western part of the Greek island. It is the most unspoiled place on the island of Gods (Crete’s nickname) where life does not depend on tourism. Sitia will allow you to get to know the Greek and Cretan culture.

Crete Autrement offers you its travel guide on the spot

How to get to Sitia?

Sitia has its own small airport (there are 3 in Crete, the others being in Heraklion and Chania), but is also easily accessible from Heraklion.

Renting a car is a particularly good choice when traveling to Sitia. From the international airport of Heraklion for example, where most of the flights from France land (Paris, Nice, Lyon, Lille, Nantes, Bordeaux…).

The road is very beautiful, especially the section connecting Agios Nikolaos to Sitia. Moreover, if you rent a car locally, you will have all the flexibility you need to thoroughly explore the area of Sitia and visit the many attractions and other beaches. If you are traveling in high season, it is recommended to book online in advance.

If you want to take the bus, you have to go to the KTEL stop, which is close to the port. Departures are frequent throughout the day. If you come to Heraklion by plane, you can take the airport bus directly to the KTEL station. There are currently four buses per day and the journey takes about 3 hours. You can consult the rates here.

Where is Sitia in Crete?

It is an ideal place to visit the famous Vai beach (28 km separate the two destinations), its protected palm forest, white sand and translucent water. Dikty Mountain is the nearest mountain. It is also an ideal starting point to visit the Minoan palace of Zakros located at the southeastern end of Crete.

Where to sleep in Sitia, Crete?

Your hotel in Sitia

The city of Sitia has the good fortune to be located not far from famous seaside resorts in Crete, such as Agios Nikolaos or Elounda (to name a few). Tourists and vacationers have the opportunity to stay in beautiful hotels in Sitia itself, but also in the surrounding area.

Book your hotel now on this map:

A beautiful beach with a view of the city. A top of the line Spa. Several swimming pools. A dense and omnipresent nature, from the pool to the rooms. Delicious meals.

Do not hesitate to
book your room at Sitia Beach
for a couple stay from 700€ per week for a couple! 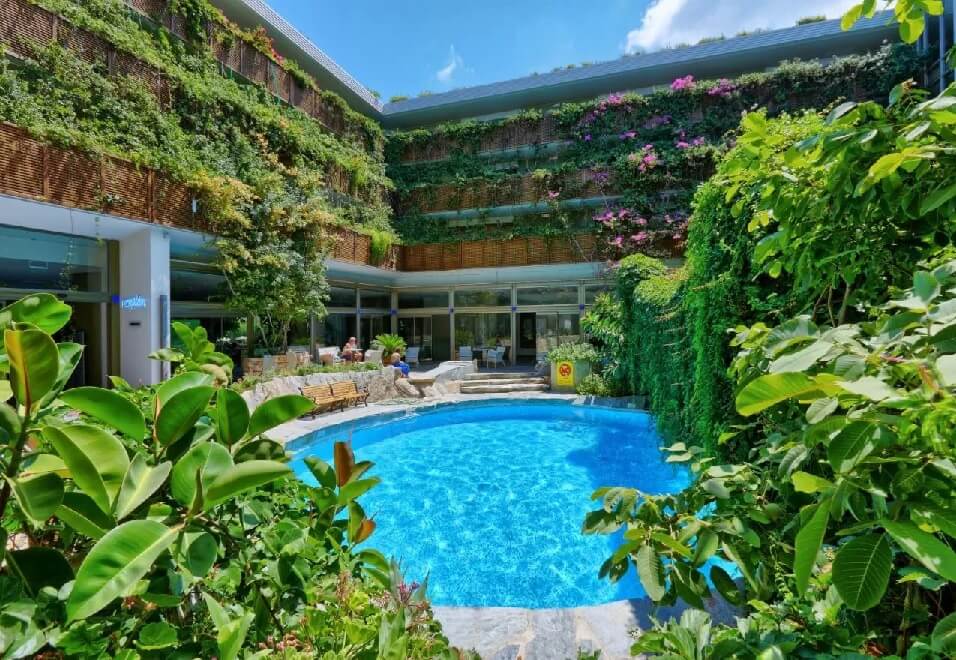 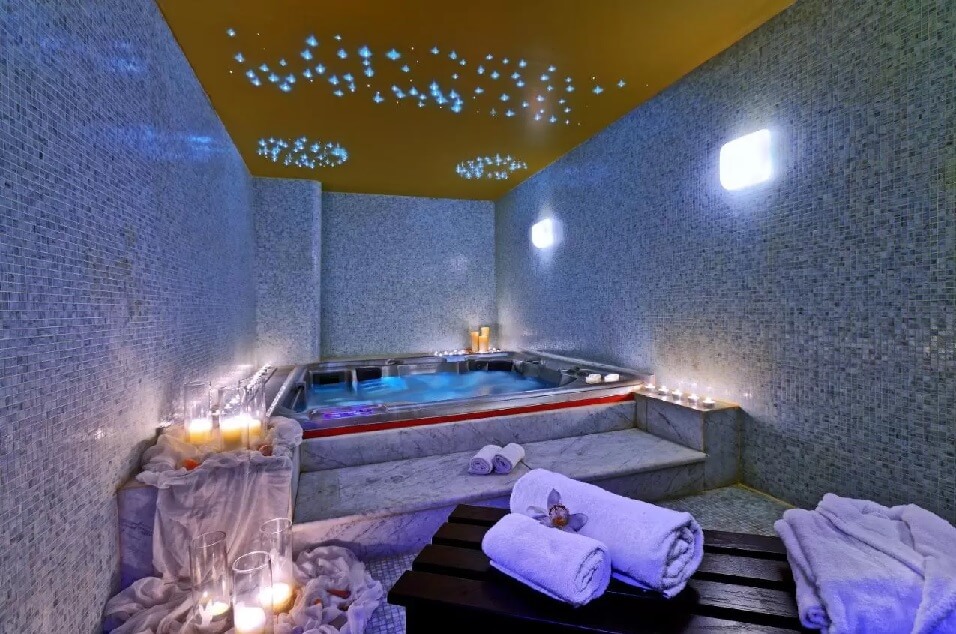 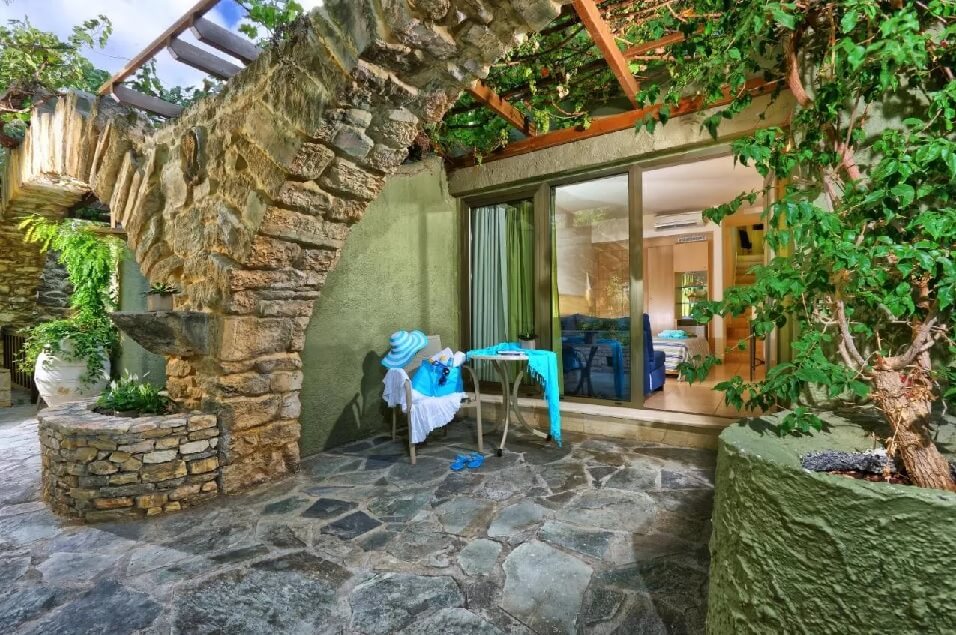 What to do in Sitia?

1. The Archaeological Museum of Sitia

Sitia has a marvelous archaeological museum where you can admire discoveries made in Crete, dating from many periods of history. Discoveries and objects from legendary Bronze Age places:

2. Visit the archaeological site of Zakros

How can we not talk about Zakros as well?

A folklore museum where you can admire high quality Cretan embroidery and weaving, as well as beautiful folk costumes. These are part of the traditional Cretan life carried during the village festivities where folk dances and good music are also watched.

The only trace of the Venetians that remains in the current city of Sitia is the castle of Kazarma. Today, it is often used for concerts and outdoor events. The view of Sitia and its surroundings is breathtaking!

4. Getting lost in the alleys of beautiful Sitia 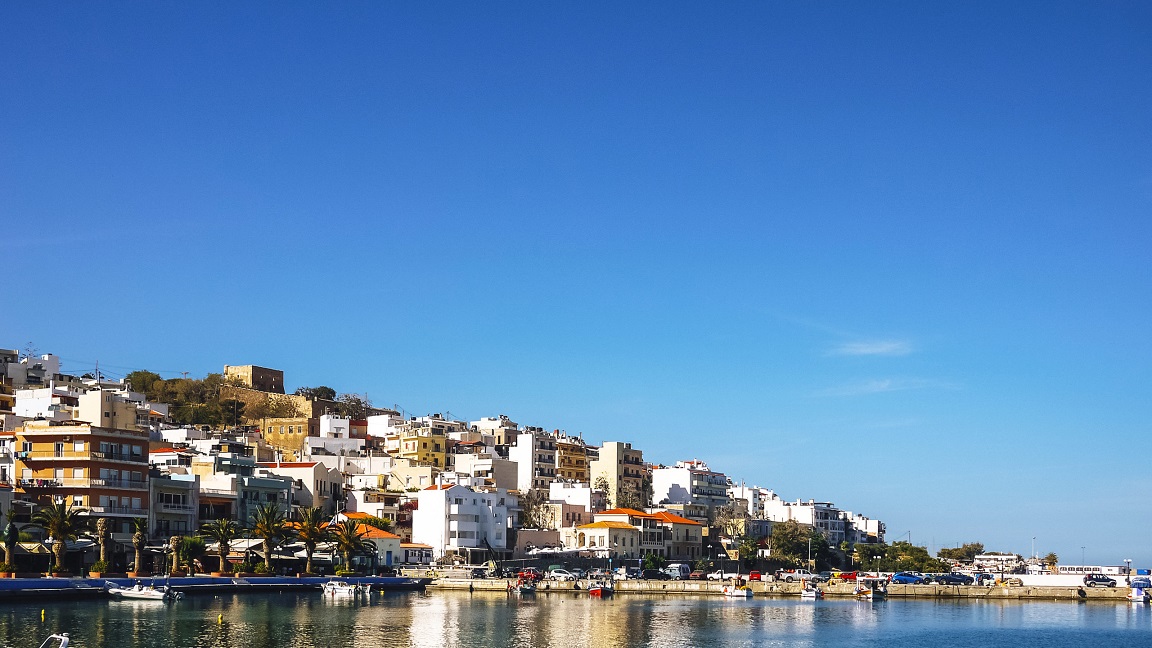 The port of the very picturesque Sitia (as well as many other ports in Crete, such as Chania or Elounda for example) is a must to visit the traditional fish taverns.

Don’t forget to taste the Cretan specialties. Rakı, distilled grape brandy, is the favorite drink of many Cretans. It is a pure but very strong drink – stay calm at first!

5. The beaches of Sitia

The beach of Vai, not to be missed

Vai beach is located only 24 km east of Sitia and is a real must see not only for the local people but also for all tourists in Crete!

Starting with its huge natural palm forest with nearly 5,000 trees, more than 2,000 years old. Legend has it that the forest originated from historical stones eaten by the Phoenicians, who often traded with ancient Greece. 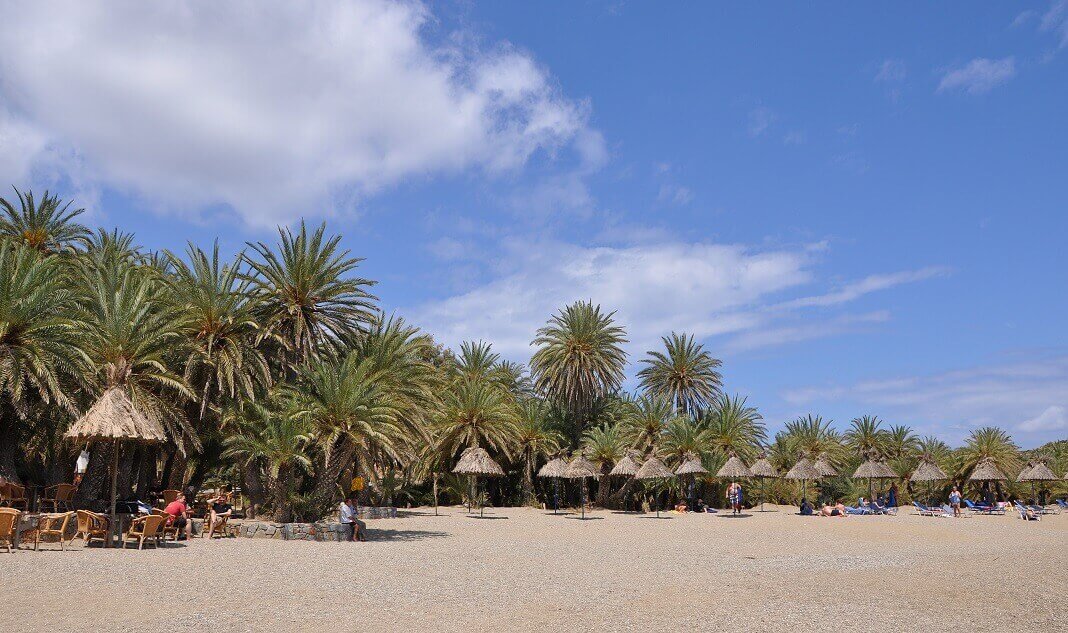 A beach with a tropical and Caribbean feel, isn’t it?

The beach on its side is a preserved area of Crete, the program: fine sand, transparent and turquoise water, deckchairs, umbrellas…

Are you ready for new adventures? A wonderful 40 minute drive from Sitia via Paleokastro will take you to the small village of Chocklakies. From this point, a one-hour hike through a valley will allow you to explore one of the most secluded and unspoiled beaches in Crete.

The beach of Kouremenos is located just in front of the peninsula of Sitia (where Vai is located). This long sandy beach is popular with windsurfers from all over Europe. This means that there is quite a bit of wind on site all year round. There is also a small fishing port and several taverns on the seafront.

Itanos Beach is located just above Vai Beach. It is in fact a series of three sandy coves with preserved beaches.

About 26 minutes away by car, you will find the fabulous Richtis Gorge and its incredible waterfall. At the departure of the village of Exo Mouliana, the walkers must know that they leave then for a hike of 3 hours! The gorges reach a height of 350 m in 3 km of walking. The walk ends at Richtis Beach: a river that crosses the gorge, and that explains not only the humidity on the spot, but also the presence of vegetation and the smell of plants that you can smell all along the walk.

At the end the view is incredible, with a natural pool, fed by a waterfall. Ideal to refresh yourself.

The Zakros Gorge is also ideal for hiking. Since the caves in the cliffs are the last resting place of the Minoans, they are also called “dead gorges”!

To access the caves, your starting point will be in the village of Ano Zakros. From there, it’s a 2-hour walk to the beach. At the end of the walk, you will find yourself near the palace of Zakros. The Minoan palace of Zakros is the least known of the four Minoan palaces excavated in Crete. It seems to have disappeared today, but its location made it the most important commercial port.

Most of the finds from Zakros are now in the archaeological museum of the island’s capital, Heraklion.

Weather Sitia : what is the weather like during the year ?

Like the Greek island, the city of Sitia has a very pleasant climate throughout the year. Spring and summer are hot, while the wet season is from November to January.

Its average annual temperature is 18.5°C with a fluctuation from 9°C in January to 29°C in July.

When to go to Sitia?

For very good weather conditions, cheap flights from France to Sitia and not too many tourists: aim for June and September.

History of the city of Sitia

It is true that it is a small town, but its history is far from history! Sitia takes its name from the old Minoan city Eteia. This city could be the home of Myson, one of the Seven Wise Men of antiquity (some say she was from Laconia in Mora). The city has developed over the centuries, thanks to trade with Greece and other Mediterranean ports. It continued to develop during the Byzantine period until it became an episcopal post.

This city was a favorite of the Venetians during their reign, but the attack of the pirate Barbarossa followed by a terrible earthquake changed the fate of the city. During the Ottoman period, Pasha Hüseyin Avni rebuilt the city under the name of Avniye, although the Greeks called it Sitia.

Sitia : what do you think about the destination ? 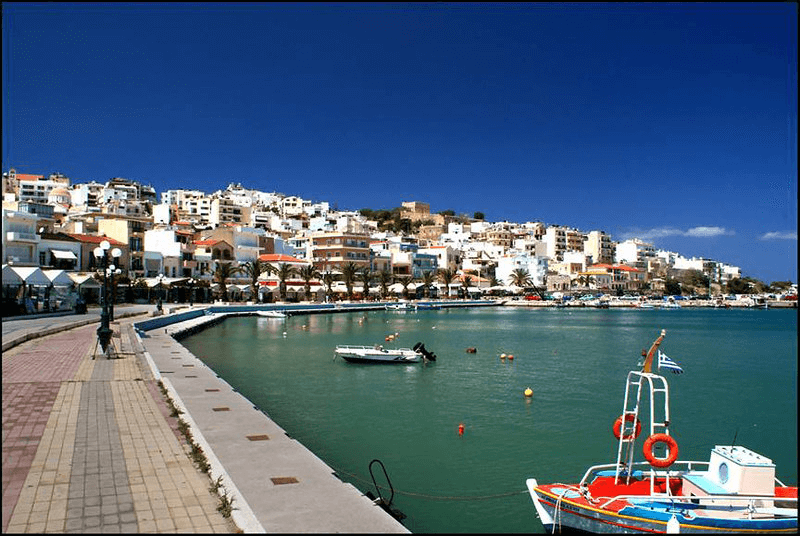 And you, what do you think of the Cretan seaside resort?

I really like this small and quiet seaside resort, with its very friendly inhabitants. This is the second time I’ve been to Sitia in September and although I make several trips during the year, I’ll be back next year.

The port is very typical, there is a nice view when you go up through the streets. The shopkeepers are very nice and the prices are affordable. For the market on tuesday, almost no interest there is a whole part thrift store as we can see in France. The food part is much more enjoyable, try to find the cheese maker in his little truck with his big clumps of cheese!

Pleasant seaside resort without being too important. Merchants go to great lengths to be helpful to you. The prices are reasonable.