Where to cruise from Mykonos? 7 heavenly destinations!

You are in Mykonos and want to explore the area and the surrounding islands? Here are the 8 day trips from Mykonos that we recommend! A dream destination for many vacationers, Greece is known for its scattered islands. Each one has its own charm, identity and history. Traveling to the Greek islands is a great way to get away from it all! Among the islands of the Cyclades archipelago, Mykonos has the reputation of being the most festive of all. This rumor has not been picked up! Mykonos is really an island where it is good to have fun, sometimes (often?) until dawn. However, like all the other islands of the Cyclades, Mykonos is home to dream beaches and pretty villages. It is also the starting point for excursions to the surrounding islands.

Here are the 8-day excursions from Mykonos that we have chosen for you!

BOOK YOUR FERRY FROM MYKONOS TO SANTORINI HERE

We no longer present Santorini. This is a classic day trip from Mykonos. Santorini is the postcard of the Cyclades archipelago, with its white houses and traditional streets, which you will find especially in Fira and Oia.

An island where it is good to rest, where one day is not enough to appreciate the whole. However, you can choose between relaxing on the beach or taking a cruise around the volcanic caldera. Because yes, Santorini is a volcanic island!

The visit of this caldera is done by boat, sailing around Nea Kameni and the volcano Tholos Naftilos. A unique moment to live that you will not regret! Finally, feel like a little trip to the beach? Santorini is full of beautiful beaches and you are spoilt for choice, some of them are very close to the port. 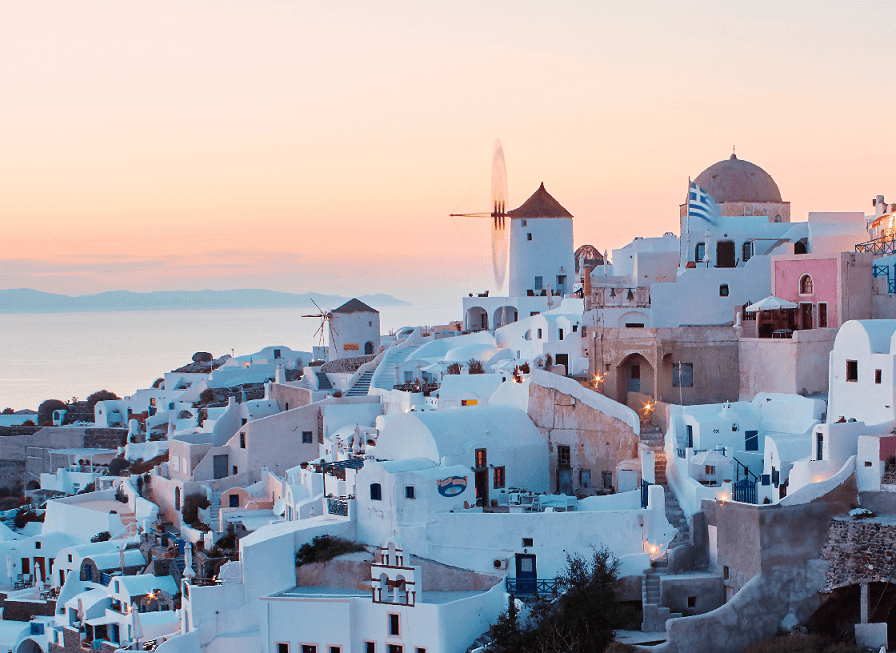 OUR TRAVEL GUIDE TO SANTORIN

2. Cruise on the island of Ios

Ios is one of the classic day trips from Mykonos. At first glance, the island of Ios has many similarities with a famous neighbor. As soon as you arrive at the port of Chora, the view of the white houses can only remind you of Santorini! We like to lose ourselves in the cobbled streets that go up and down, with their small houses, cafes and bars.

Those who appreciate ancient Greek literature may be familiar with Ios in one particular respect. It would indeed be the last home of the famous poet Homer. Truth or legend? Impossible to know for sure. Nevertheless, the poet loved to spend time on Ios, and his tomb is located in the north of the island.

Whether you like Homer or not, you can go there for the exceptional views of the sea from the headland.

Speaking of the Mediterranean, there are many beautiful beaches on Ios to relax and swim before heading out for a hike on the island. Finally, don’t forget to try one of the many local restaurants to taste the culinary specialties of the famous Cretan diet.

BOOK YOUR FERRY FROM MYKONOS TO IOS HERE

3. Cruise on the island of Paros

Its location in the center of the Cyclades archipelago makes Paros an ideal excursion from Mykonos. The island is especially appreciated for its beautiful beaches and white houses, like in Santorini. Once in Paros, your steps will lead you to the villages of Parikia, Naoussa and Lefkes.

Famous for its beautiful winding streets dominated by the castle built with marble from an ancient temple, Parikia is the port of Paros. The huge Byzantine church Panagia Ekatontapilian (“The church of a hundred doors”), built in 326 and still original despite an earthquake that damaged it in the eighteenth century, is located in Parikia.

BOOK YOUR FERRY FROM MYKONOS TO PAROS HERE

The rest of the island is fairly well served by bus and cab. This allows us to admire the village of Naoussa to the north, a typical old port with beautiful white houses. Further south and inland is Lefkes, which resembles the alleys of Santorini.

It is by far the best place on the island to have a coffee or lunch! Finally, nothing prevents you from visiting the beautiful beaches of Paros at the end of the day! 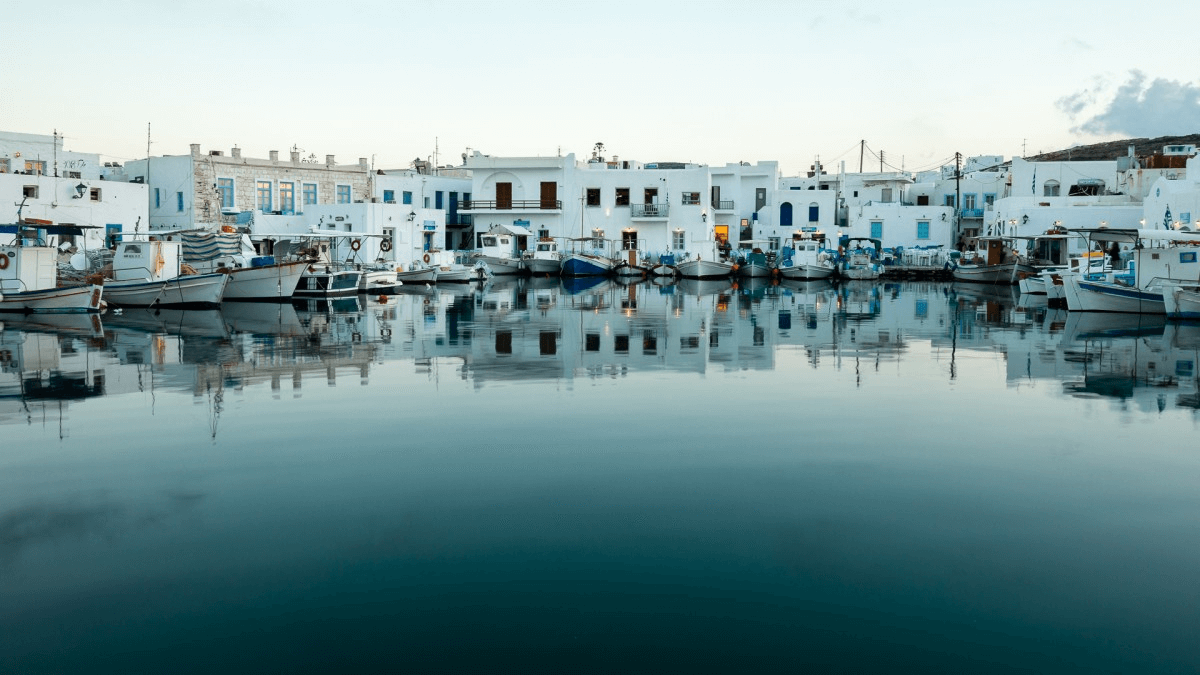 OUR TRAVEL GUIDE TO PAROS

Syros is rarely mentioned among the day trips from Mykonos. However, this island is a real hidden gem, with absolutely beautiful places. The first of them is the picturesque village of Ano Syros, where one likes to get lost in the alleys.

Built in the 13th century as a fortress, Ano Syros is the jewel of the island, a unique place to spend hours sipping a cocktail on a shady terrace.

Ano Syros is in fact a district of Ermoupoli, the port of Syros. The island was once an important commercial crossroads in the Aegean Sea, and since then, Ermoupoli has preserved a neoclassical architecture that is not common in the Cyclades. The City Hall, located in Miaouli Square, and the Apollo Municipal Theater are the most outstanding examples of this architecture.

BOOK YOUR FERRY FROM MYKONOS TO SYROS HERE

5. Cruise on the island of Naxos

Finally, of course, it is possible to enjoy the pleasures of the beach in Syros. There are many of them, sometimes built by hand like the Astorias.

Although we have never been to Greece, the name of Naxos resounds in our minds. Nothing more than normal, Naxos is a very important island in the Cyclades and with Greek history. It is therefore quite normal to use a day trip from Mykonos for this.

BOOK YOUR FERRY FROM MYKONOS TO NAXOS HERE

Greek mythology welcomes us as soon as we arrive at the port with the remains of the temple of Apollo, ideally located on a small promontory. It is quite possible to go there. Well done, we know we’re here for the incredible views rather than the few remaining remnants!

On the other hand, the temple of Demeter is much better preserved, near several ancient orthodox churches and the Apano Kastro in the center of Naxos. Apano Kastro is in fact the ruins of an ancient castle. If the weather allows it, we can only advise you to go there, at least for the panorama from the heights! 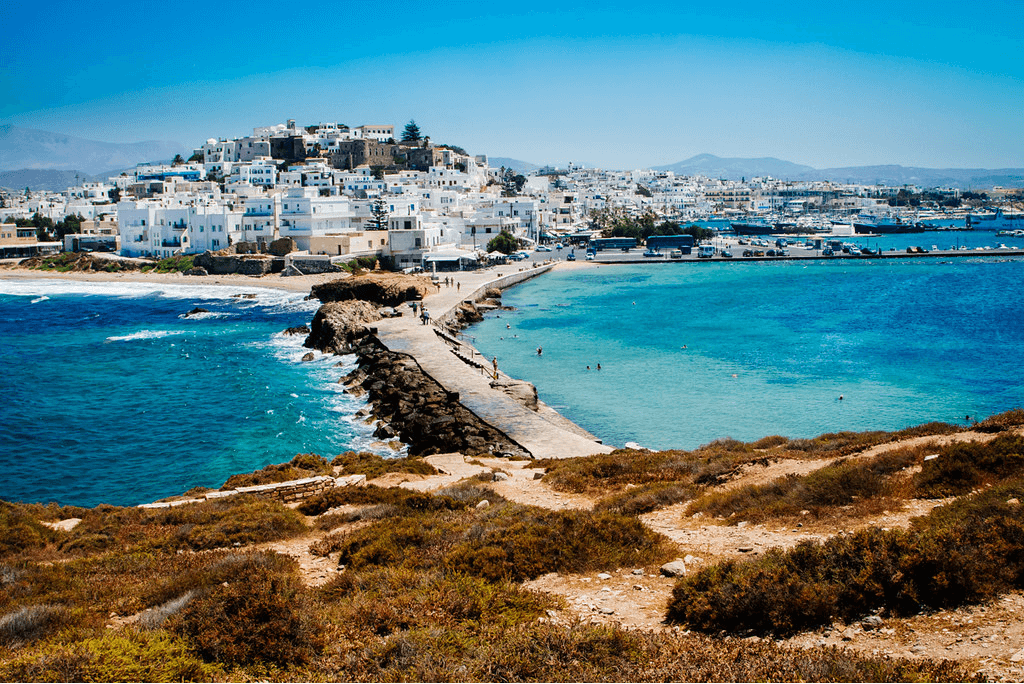 OUR TRAVEL GUIDE TO NAXOS

6. Cruise to the island of Tinos

Nice day trip from Mykonos, Tinos is a small island in the Cyclades. To visit it is to discover a relatively calm and authentic place, protected from mass tourism.

The village of Tinos, the port of the island, is known as a place of Orthodox pilgrimage around August 15 to celebrate the Assumption of the Virgin Mary. Tinos is in fact the home of Panagía Evangelístria, the main church dedicated to the Virgin Mary. Even if you are not going on a pilgrimage, don’t miss the visit of this beautiful church!

The villages of Volax and Loutra are located inland, quite close to each other. Both are authentic villages, with cobbled streets and small houses. There are also typical taverns to taste the culinary specialties of the Cyclades.

BOOK YOUR FERRY FROM MYKONOS TO TINOS HERE

Around Volax and Loutra, if you start to see some pretty amazing buildings, you are approaching Tarambados. These buildings are in fact dovecotes and Tinos is known to have a good dozen of them! The best preserved are around Tarambados.

Finally, if Tinos does not have the most beautiful beaches of the Cyclades, nothing prevents you from refreshing yourself before returning to Mykonos!

7. Cruise to the islands of Rineia and Delos

Among the excursions from Mykonos, Rineia and especially Delos are among those not to be missed. First of all, the proximity of Mykonos makes the trip easier, and many agencies offer a half-day or a day to see the place. Then, Delos is a very important island in ancient Greece.

The island of Delos is an uninhabited island with one of the most important archaeological sites in Greece. It is in Delos that the sanctuary of Apollo is located, birthplace of the god of art and music according to Greek mythology. Whatever the importance, one enjoys the visit, and the remains are quite well preserved, especially the old theater.

BOOK YOUR FERRY FROM MYKONOS TO RINEIA AND DELOS HERE